4G LTE is not as important as you might think

4G LTE coverage is the marketing mantra in today’s race for capturing the most customers for the cell phone networks now-a-days. Although 4G LTE is one crucial metric to decide when looking to choose between one carrier or the other, that metric is not the most important metric to go by for two reasons. One 4G LTE drops its data rate at 10 Mbps download rate and it does not really come into play unless you are watching streaming movies from Netflix. Most of the time the phone is only working on a 3G or 2G speeds and making sure you are having a reliable 3G or 2G signal is what is going to keep you connected and surfing then internet when you want and where you want. That is the reason apps made for mobile are designed to work with 2G and 3G speed since 4G LTE is still a novel feature in some part of United States and very much so outside of US. The 4G LTE penetration is onlt 10 % in the middle east and 25% in Asia. The popular text and voice app Whatsapp developers developed their app on a old Nokia phone and tested it on older model phones. Because Smartphones are still out of reach for a lot of consumers outside of developed nations and Whatsapp was developed to connect all around the world and that is what it was such a huge success story to be bought by Google for 6 billion dollars.

Their is already talks about the 5th generation standards and research is being done both from the academics and the industry on what to achieve with this next generation on telecommunication technology? Of course it is easy to get behind more speed! which is easy to understand and a have beem marketers delight. But, the real issue is not the speed, since we already have speed on our hands with 4G LTE that is as fast as Wifi and we still have not used it to the fullest potential. The 5th generation is more a focus on the IoT (internet of things) and the it is going to be based on a new standard of protocol 802.11 ah or also called the HaLow pronounced (hey-lo) aims at connecting the electronic things that are going to find its way into your home. To give you an example of what the potential is when you go to your grocery store the IoT can populate a list of things you need to buy while you are shopping with a list of things that your smart refrigerator has manged to populate based on your daily consumption, just one scenario how technology can actually make you more efficient shopper . Because one thing we all hate to do is come back from the grocery store and realize you have forget to get milk. 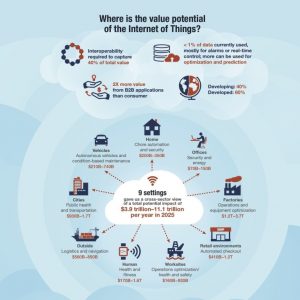 So, the 5th generation is frequency that is still available for public use and it is low frequency less then 1 Ghz by design, cause these low frequency waves can penetrate through walls and other obstructions that typically can weaken WiFi and cell phone signal. Also, the 5th generation frequency is tailored to operate consuming less power means the devices can go without battery or charge for up to an year in some cases. These are sensors and devices that we will have in our cars and homes that only use power occasionally and at a much lower speed then a cell phone does. So these 5th generation protocol needs to cater to a host of devices that are prevalent in a wider area and communicate at a larger range , which makes the 5th generation a web of things that is connected and needs to maintain a way of communicating with each other on a need to communicate basis. In this sense it is not an upgrade to the 4th generation because the the purpose of communication is not in the conventional sense of voice , text or internet. The purpose is to connect  a wide range of sensors and devices that we use in our daily lives.