Nowadays, people are trying to get a strong signal inside any buildings, office towers or in hotels. To pick up the odds and ends of the carrier signal we end up moving near the window. At the time being, each one of us not only holds a smartphone, but we completely rely on them to communicate. Apart from this there are some alluring Frontline business mobile applications that are gaining importance among business magnates? These lead to the serious impact on the real estate developers and landlords to ensure solid cell receptions when the tenants reside in their property.
Many business tycoons reckon on smartphones as a means of communication so being a property holder it is bad for your business if you provide weak signal.
Prospect in IT industry: 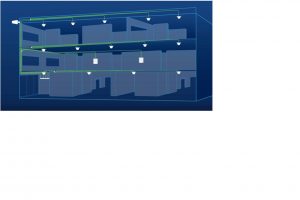 To the contrary, if IT can support strong coverage along with huge capacity it’s an advantage for business. Nearly 80 per cent of calls originate indoors and it becomes even more tedious job. Now, some technologies are on brink to provide in-building wireless (IBW) networks, which include DAS, Small Cells and IP (Wi-Fi), which vary accordingly based on the building structure considerations.

The standard infrastructure promises to launch a converged network where multiple services are served by a single backbone, which includes serving commercial cellular, IP (Wi-Fi), and public-safety. This emerges towards Self-Organizing Networks (SON), along with some appealing new solutions to address the transformations. The industry is eventually fighting between the hype between small cell and DAS which are difficult to separate.

DAS technology introduces carrier signals inside a building and re-transmits with the help of radios and antennas. On the same system, it supports multiple carrier networks. They are the ultimate solution for large deployments.
By developing wireless signal through a network of base station towers (BST), a carrier network work. When the signals are transmitted within the tower’s geographical area two-way communication happens where a phone can send the signals back. The satellites work for GPS, similarly BSTs creates a coverage footprint. Once you get to the outer edge, the overage weakens. As they move away from footprints the coverage gets dissipated.

There are two types of DAS: Passive DAS and Active DAS. Passive DAS captures the signal with the help of an antenna from outside the building, strengthens it with an amplifier, and then they are transmitted. They use copper coax and it is the best solution for smaller properties. On the other hand, Active DAS use carrier-provided BST to produce a cellular signal directly. The signal source is connected to the DAS head-end where the signal is sent to radio units via fiber optic cable. The remote unit sends the signal to antennas over coax. It’s great for buildings with varied sizes.

Traditionally, Active DAS are used in large venues such as shopping malls, casinos, and stadiums. It is broadly used over 500,000 square feet. Even though it has been initiated for a very simple reason of holding back the customers it is emerging as an eminent technology.

The Small cell technology is another viable option given in the hands of property owners. It is a carrier-controlled radio access node which occupies a coverage range from 10 to several hundred meters, as proposed by the Small cell forum. Invariably different cell exists from the small femtocell to the large microcells.

This solution beholds benefits such as cheaper and more flexible than installing a BST for a DAS. Apart from this, they appear less visually intrusive and they tend them to more flexibility in mounting location options because of its small size.

Progression of work to transform the present advancement in technology to face the more open and wider environment, one among them is a multi-technology, multi-operator, multi-spectrum, and multi-domain.

Among the new and afresh technologies, Spider Cloud’s Enterprise Radio Access Network system is gaining the interesting notion. They with the help of standard Ethernet LAN/VLAN technology solves the emerging and fast growing capacity demands made by cell tech and mobile app services. The Radio Nodes and Service Nodes are two essential components connected to a standard Ethernet LAN. The Service Nodes make use of SON technology to ensure key performance indicator (KPI) expectations by configuring a dense network of Radio Nodes.

To strengthen cellular, Wi-Fi, and HDTV signals go to Sure Call’s Fusion 7 is a 7-band signal booster that extends the range and complements Sure Call’s industrial strength Force 7 signal and Wi-Fi booster. Both the products are cheaper to DAS and carrier-agnostic; they are expected to work well with the emerging Het Nets. Signal boosters are just a small piece of cell that takes the cellular signals and re-broadcast them. Apparently, they are the best option for improving the coverage area in specified locations, but unfortunately they do not improve network capacity.

Building cell coverage has become a necessity keeping apart the trend. All property owners and industry managers are upgrading the most reliable, cost-effective solution, to avoid their customers to even think about moving towards their competitors due to the low-rent coverage.