Cell Phone Jammers is not only illegal, but immoral

Experts say that it’s clearly illegal and potentially dangerous to use those spiffy gadgets that can jam cell phone signals. A few years back Google has lightened up the internet with people searching for them. You can thank a guy in Philadelphia who got fed up with folks yakking during his daily bus ride and a local news reporter who happens to ride the same bus, too.

Among some security experts the main cause for concern broke after few days, with apparently renewed fresh interest in the devices (which can be had online for anywhere from less than $40 to more than $1,000) 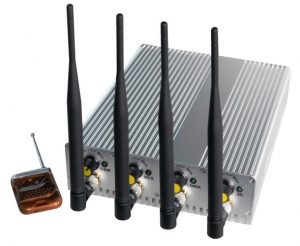 “The common people don’t realize what they’re jamming if they were to start using these things,” said Richard Mislan, an assistant professor of computer and information technology at Purdue University who specializes in cyber forensics.

After the reports, throughout the weekend “cell phone jammer” was one of the top 10 searches on Google Trends. Cell phone jammer is equipment that can prevent mobile phones from receiving and sending mobile signals to stations nearby. Working in this way the signals within the jamming frequency of a certain mobile phone signal jammer can be blocked and lost is its ability of making phone calls and sending messages outside. And people who stay in the jamming distance area will not be disturbed by the loud phone calls and keep good condition in quiet thinking.

Jammers work in much the same way online “denial-of-service attacks” on websites do — transmitting a signal on the same frequency as mobile phone calls in the area. Cell phone jamming devices were originally developed for law enforcement and the military to interrupt communications by criminals and terrorists.

The legality of the jammers varies from country to country. In the United States, it is generally illegal to sell, own or use one without the government’s permission. Still, the devices are offered for sale on a handful of websites.

A former communications electronic warfare officer in the U.S. Army, Mislan said law enforcement has “very specific worries” about how cell-phone jammers could be used by criminals. “But even someone looking to do no more than hush an annoying neighbour on the bus could do some very real harm,” he said.

For example, in the Philadelphia case, the jammer could have cut off the bus driver’s communication with a dispatcher who was trying to communicate emergency or traffic information. And that’s not to mention other folks in the area (aside from the offensive loud talkers) who may have missed potentially important phone calls.

Also in Chicago a man named Nicholl, who shares my intolerance for travel babble, took things into his own hands and used an illegal device — described as a black box with several antennas — to jam the cell phone connections on his train car, causing them to instantly drop calls.

“In layman’s terms, they basically just interrupt the signals in the area.” But, they are a louder signal, if you will, than anything else in the area. As a phone tries to connect to a tower, it can’t because there’s this other noise that’s in the way.”

Jamming phone calls, however, is a Federal Communications Commission violation. A Floridian was fined $48,000 for using a similar device, and citations have been issued for those who offered to sell the illegal devices on Craigslist.