Why separation is so crucial?

Separation is crucial because other wise the signals gets all crisscrossed and jumbled. The result is you having to deal with interference of cell phone signal, which means dropped calls and unwanted noise. The antennas are the loud mouths that enable the cell phone to talk to the towers that you see on highways, those tall metal structures with dish antennas. All our cell phones have antennas as well but they are so small and hidden that you don’t see. However the antennas are there and that is what enables you to make calls  and receive calls . The cell phone signal boosters have a donor antenna and receiver antenna. The donor antenna sends out signal, while the receiver antenna like the name suggests receives signal from the cell phone tower.  Now, as far as the antennas are concerned they are not intelligent devices that can distinguish they antenna at the cell phone tower or they antenna that is n your phone. They take the path of least resistance , meaning they will talk to any antenna that is in their closest vicinity. If the two antennas are not separated then they are going to talk to each other. 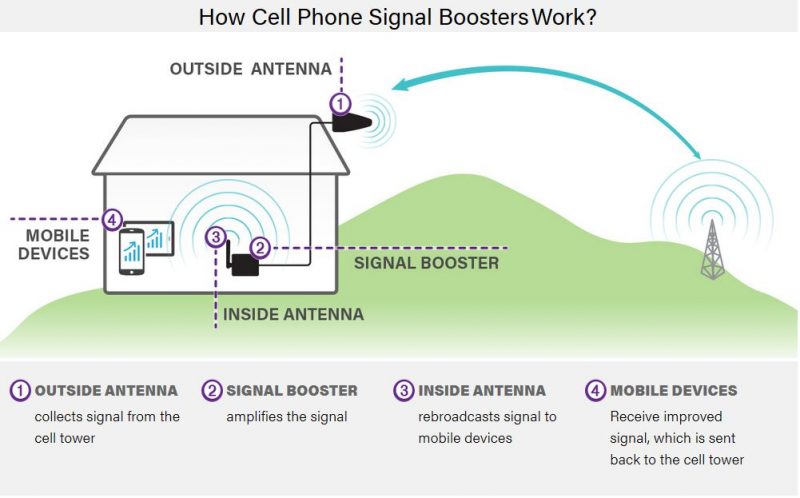 The outdoor antenna is physically separated from the indoor antenna but to know how much , follow this simple guide below to obtain the optimum separation.

Almost all cell phone signal boosters for home application have a DIP switch or Dials for amplifier adjustment, you can first reduce or amplify the signal to get rid of interference , but it should also be noted that this method can reduce your coverage area.

This is another method where if you introduce a metal sheet preferably aluminum will act as a signal blocker between the two antennas. Since metal are highly  reflective with radio frequencies, you can get rid of interference via introducing materials such as this or thick concrete walls are other alternative. We are not saying you construct one , but you have one you can relocate the antenna to a concrete section of the house if you have one.