Galaxy S8 with its 6.2 inches large screen is astounding. It is way special than predicted. Things are looking bright for Galaxy S8 for now.
Sparkling design

Nothing can stand par with Galaxy S8! The shimmering glass that glows when the light hit and the curved back nestles that suits your palm. It’s available in three subtle colors- dark black, bright silver and a grey with a bluish tinge.
The sturdy and precisely made S8 is thin, and incredibly light which weighs 155g. It has fingerprints scanning features which are far better than other smartphones in the market. 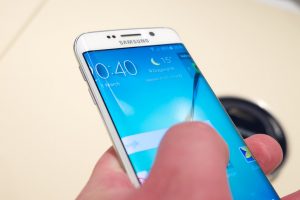 Similar to the recently launched, LG G6, Samsung galaxy S8 also have large screen. And this is one of the astonishing features of Samsung galaxy S8. Varying with G6 the display here molds into sturdy metal rim. There is no “Edge” version launching this year because of sloping panel in both the versions.
Just like the Note 7 and Galaxy S7 Edge it has much subtler curve which makes them easier to use. The encounter of an eye catching look with a little bit of extra reflection on the screen but also it is a small trade-off.
Presence of a big display and tiny key makes no room for fingerprint-sensing to sit on the front of home button. But on the other hand it is on the back just next to the camera. These features disappoint me where I have to play the camera multiple times for testing.
LAUNCH OF HDR IN PHONES:

There is so much to show apart from the curve. To start with, it has a great aspect ratio of 18.5:9 instead of 16:9. This indicates that it is much taller whereas allows you to allocate more body space compared to S7. Galaxy S7 has 5.1- inch display whereas the new S8 has 5.8-inch. Though it sounds big it is much more comfortable and handy.
Most of the Samsung phones are with an AMOLED panel and with an odd 2960×1440 resolution. To stream HDR (high dynamic range) in Amazon Prime and Netflix it is ‘Mobile HDR Premium’ certified. To give you better contrast and a brighter picture in recent years HDR is considered arguably a most important evolution in TV tech.
If you are a user of S7 or S6 you will not be shocked by its stunning display. A glorious color manages to get rid of bright shades over saturation. Like a painting on a display short HDR clip portrays inky blacks, blues and reds.
HANDS ON EXPERIENCE TO FEEL LIKE A DESKTOP:

Apart from increasing battery life, a new feature ‘DeX’ is being powered with an extra performance. It just gives a Microsoft’s Continuum feel without being terrible.
To avoid over heating USB-A ports and Ethernet connector with fans in the base is provided.
App support is what that makes them much better than continuum. With resizable apps we can switch between phone and tablet version depending on what you need and you can browse many at the same time.
If you are not satisfied with just mobile apps you can stream actual Windows desktop. Even though it does not comprehend to replace your PC, it is considered as one of the best and interesting interpretation features.

In almost every area S8 is a much better interpretation and a sizeable improvement in all areas compared S7, but not in case of camera upgrades. There’s no dual-sensor system here, no wide-angle lens or variable aperture. Behind a wide f/1.7 lens there is a single 12-megapixel sensor which utilize the similar dual-pixel tech as such as S7,
With 8-megapixel sensor the front is on the verge of new upgrade. It has autofocus and a f/1.7 aperture which is still a unique feature on selfie camera. The secondary camera is used for iris scanner which Samsung claims to be the new improved version.

Software is considered as main weakness of Samsung but that is not prolonged anymore. With much more matured icons, on-screen buttons and good-looking, functional software layer on Android 7.0, and they have introduced edge and angular Samsung S8.
The clean and crisp stark white color scheme and every other Samsung’s apps got used to that look. As that sort of clashes with the newly updated Gear VR and its snazzy motion controller, Google Assistant is on board, although I doubt there will be Daydream support.
Bixby, Samsung’s Siri rival are the biggest software addition. This personal assistant is stuffed into the software and pops up everywhere. The dedicated Bixby button located on the side, allows you to need to call out an awkward phrase to get it going, and the camera has a setting for scanning everyday items and searching online for the best price.
Galaxy S8 has 3000mAh cell which is small and compact. This specially designed to power 5.8-inch mobile HDR display. It’s considered as a much more efficient processor by Samsung. Wireless charging is still here (even on the European model – take note, LG) and Adaptive Fast Charging too.

If you want to get your hands on one, you can buy or finance at Samsung.com